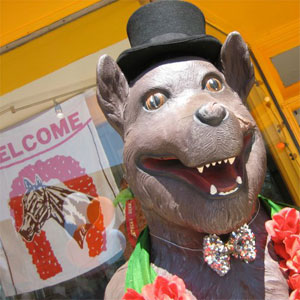 He began life as the loving mascot of a certain Colorado-based brewery, but The Bearwolf has since undergone a name change and hitched his wagon to WHY Louisville. Now he spends his days watching over the store, wearing funny costumes, and posing for photo ops. Think you’d look good next to The Bearwolf? Come on in and have your picture made with him! He’s very photogenic and he very rarely bites. 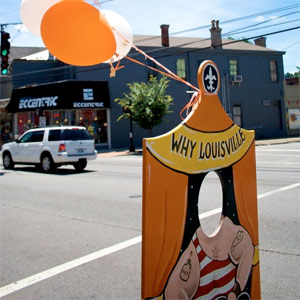 Bardstown Road is a lot more fun when our carnival cutout sign is on the sidewalk. Passers-by love to have their picture taken as an old time carny strong man or bearded lady. Our carnival sign was illustrated by Col. JD Wilkes from The Legendary Shack*Shakers and we’re honored to be included in his repertoire of sideshow banners and posters. Come down to 1583 Bardstown Road and put yourself in the carnival! 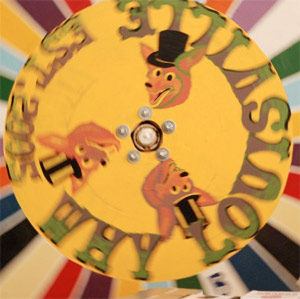 At one time, it may have been a cake wheel at a church picnic. These days the Wheel of Awesome hangs on the wall at WHY Louisville and mesmerizes customers as they watch it spin around and around. Does it ever stop on its own? No one knows for sure. Is that a Chevrolet lug nut pattern? It sure is. Can you win a free T-shirt by landing on lucky number seven?. Probably not. It does look cool, though. Don’t you think? 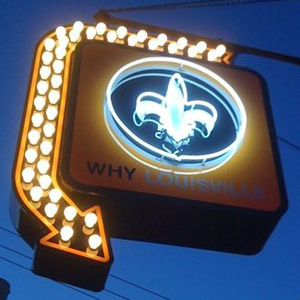 On a dark, clear night our neon Fleur-de-Lis overhead sign can be seen as far away as Eastern Parkway. It’s even been known to guide wayward Cessnas to a safe landing at Bowman Field.* That’s what a giant neon Fleur-de-Lis and about eighty lightbulbs will get you. It’s also impressive in the daytime—the sun really brings out that orange.

*Just kidding. If you happen to be piloting a Cessna into Bowman Field, please rely on FAA-approved means of landing your aircraft. Our neon sign will do nothing for you.

The Bearwolf was starting to get lonely up in our sale room, so we thought we’d give him some company. Bearwolf loves to hang out with other mythological creatures and we happened to know of a Jackalope in need of a home. She’s a big fan of our Elk Shirt because it “compliments [her] rack”, as she says. Whatever you say, Jackalope!

This creepy, friendly clown used to live at the gone-but-not-forgotten Fontaine Ferry Park where he smiled at and creeped out Louisvillians for the better part of a decade. He’s traveled a rough road since the park’s closing, but he’s finally made it to a place where he’ll be appreciated as the creepy, friendly clown he is: nestled between a glowing “W” and “L” in WHY Louisville’s chamber of curiosities.

Buried deep within the WHY Louisville offices, the Mysterious Half Door bewilders and astounds the staff as they ponder: what’s on the other side? No one knows for sure, and everyone seems too scared to find out. It very well could be the portal into John Malkovich’s consciousness. If you ask nicely, a friendly WHY Louisville staff member may even allow you to view the Half Door and take its picture. But please, no tempting fate—some doors are better left closed.